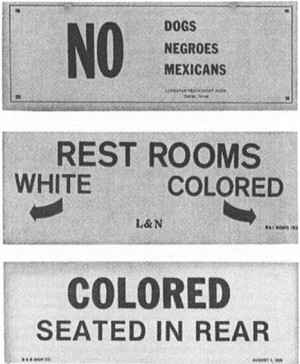 I have a question for Indiana Governor Mike Pence: With the passage of Indiana’s Freedom of Religion Act, will some God-fearing folk be able to change the words “Colored” or Negroes” on the signs above to “Gay?” Governor Pence said, “This bill is not about discrimination, and if I thought it legalized discrimination in any way in Indiana, I would have vetoed it.” Really? Everybody, including Governor Pence, understands that the bill was designed to give people (clergy?) the freedom to deny marriage to gay couples. What’s the difference between denying gay marriage on religious grounds or a religious person denying service to a gay person at a restaurant? Will anti-gay religious people be able to designate water fountains for “Gay” and “Everybody Else” or change signs like the ones below to read: “GAY PEOPLE SERVED IN THE REAR. WE SERVE GAY PEOPLE CARRY OUT ONLY?” As one lawyer commented with regard to my questions, the Indiana law creates a “very slippery slope.”

Governor Pence and the Indiana legislature passed this law only because the Supreme Court has done a courageous thing. The Court determined (thus far and I hope will do so with finality) that to deny marriage to a gay couple deprives them of an unalienable right. Yea!! How I wish all religions would affirm the right of ALL people to love and marry as they choose.

I have been an ordained United Methodist pastor for 30 years. My denomination currently bars its clergy from performing gay marriages. No state or federal government agency has ever attempted to order the United Methodist Church to allow its clergy to perform gay marriages. They never will. What we do in our church buildings is our business. Unless we break a law that injures somebody else, we have the freedom to practice our religion inside our buildings as we wish. If, however, I shoot a person in my church building or outside of it, I will be arrested, because I denied somebody their unalienable right to “life, liberty and the pursuit of happiness.” As far as I am concerned, my denomination’s rules against gay people DO deny good people of an unalienable right, which is why I will perform a gay marriage, whether inside or outside my church building. Our unjust rules, however, have me asking if I can remain a member of my denomination, even though the local church that I currently serve has, for over 20 years, declared itself to be open, affirming, welcoming, reconciling or any other word you want to use that says, “Welcome! You are a beloved child of God! Come sing and pray with us!” Even so, am I condoning injustice by staying? That’s a troubling question.

The saddest thing is that some Christian people deny gay people their rights, because the Bible says homosexuality is wrong. Yes, it does. The Bible also says that slavery is OK, but we determined that the Bible was wrong on that one. It says women should have their heads covered in church, but nobody enforces that rule. Why don’t Christians eat Kosher foods? The Bible says we should. I have heard one too many Reverends say, “Well, those things were written for “back then.” My question is, “How do they know what was written for “back then” and what was written as God’s eternal truths? Nobody denies that God calls us to be a people who create love, justice, peace, grace and hope. To deny people the right to express their love for each other is a fundamental breaking of God’s law.

I heard Rev. Brent Sadler on CNN say that, if we abandon the rules in the Bible, we will have to “start to try to figure things out.” That’s right, Rev. Sadler. We need to believe every word in the Bible, otherwise we will have to THINK! Wait a minute! Didn’t God create us with a brain? I assume that since God created us with a BRAIN, God also expects us to use it to decide what is right, loving and just. However, if Rev. Sadler doesn’t want to “figure things out,” in our great country, we respect his right to do so. He cannot, however, deny me or anybody else, the right to use our God-given intelligence to discern the ways of God.

When Dr. King led the civil rights movement, he advocated for non-violence. His reason was that, by practicing peace, his people would prove that they were more enlightened than those who beat them with clubs or taunted them with vulgar words. As frustrated as I am with the leaders of the State of Indiana and what some people in the United Methodist Church declare to be truth, I will not stoop to their level. Instead, I will pray for them. I will pray, “O Lord have mercy on their souls.”