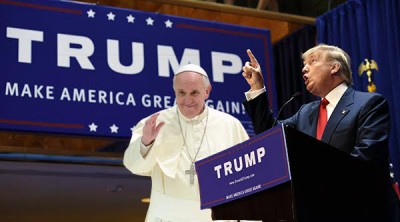 Posted on September 27, 2015 Life and Spirituality

The vote has been counted! The winner won in a landside! Who won? Before revealing the winner, here is a snapshot of the losers. The losers are all those candidates or holders of public office who specialize in angry, vindictive and judgmental rhetoric. On the right are those who call anybody who believes in climate change delusional and everyone who supports abortion a murderer. For them, if you believe in gay marriage, you are going to hell for messing with God-ordained family values. If you support a pathway to citizenship for immigrants living in this country illegally, you are feeding a flock of demons that are ravaging the soul of our nation. On the left are those who demean someone’s intelligence, if that person does not believe in climate change and that anyone who is pro-life hates women. If you do not support gay marriage, you are homophobic. If you believe that the laws against illegal immigration should be strictly enforced, you are clearly a racist. Even some who are stuck in the middle get nasty as they take shots at both the left and the right. Sorry children who make a living demeaning one another, you lost this election.

There are other losers in this election. There are Christians who suggest that you either profess your faith their way (which is the ONLY way) or you will surely burn in the fires of hell. Muslims who kill each other and anybody else who does not fully embrace their particular Islamic brand (Sunni or Shiite?) are losers, too. As a matter of fact, any religious person who claims to know the spiritual “heart” of another human being lost this election.

Now for winner! Can I have the envelope please? The winner is Pope Francis. Here is man with whom I have profound disagreements, but I am certain that if the Pope and I had lunch together, even though we would most likely cling to our fundamental differences of opinions, we would still listen to one another and conclude our meal by embracing and accepting one another as brothers. Pope Francis understands and lives what a certain 1st Century man from Nazareth taught: “Don’t judge or you will be judged, love God and love one another, go out of your way to love kids and reach out a helping hand to those in need.” This good, not perfect, Pope understands that encouraging words trump angry, judgmental rhetoric any day of the week and twice on Sunday. He is man who does not demean those with whom he differs, but listens and tries to understand their point of view. Pope Francis leads with love and is quick to dispense grace. He is a winner, a breath of fresh air blowing against the stale, smoggy, suffocating air of hatred and condemnation.

Most of us are not idealists. We are quite certain that Pope Francis saved our collective souls only briefly. Sadly, as soon as the Fiat Pope-mobile drops him off at the airport and Pope Francis flies away on “Shepherd One,” the ugly voices and hated-filled actions of the LOSERS will, once again, fill the airwaves. The exhilaration we felt will fade into a distant memory. But, then again, maybe not! Those who lost will only win, if we let them. We can continue to embrace the spirit of Pope Francis, at least in the little corner of God’s world that we inhabit. To the degree that we are able, which can be very human and frail, we can put judgment aside, love our Higher Power, love those who walk this earth with us and even love those who test us. We can stop and pay attention to our kids as we travel the roads of life and we can do our best to reach out a hand to lift up someone who has fallen by the wayside. And…this is hard…we can listen to those with whom we disagree and, if our points of view cannot be reconciled, we can get up from the table and embrace the one with whom we disagree as a brother or sister. We can lead with an encouraging word, a little love and a whole lot of grace.

The cynic may ask, “What does it matter? How we live will not change a thing.” I disagree, because the last time I looked, a small pebble thrown into a still pond, disturbs the whole pond!

One thought on “Won in a Landslide!”