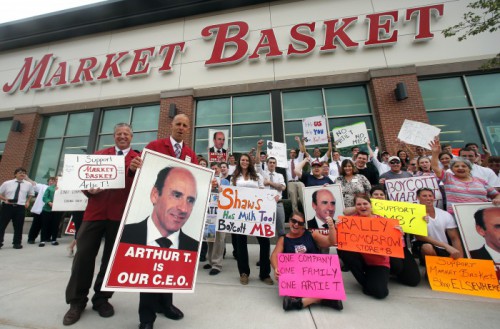 Posted on March 8, 2015 Life and Spirituality

Got up early yesterday and headed off to Market Basket in Bourne. I choose to grocery shop there a couple of times a month, essentially because I am cheap. Even though it is only five minutes away, the prices at Stop & Shop give me severe sticker shock. It takes about 20-30 minutes to get to the “Basket”, but it’s worth it. It makes me happy to leave with a trunk full of groceries, without having to acquire a second mortgage.

Yesterday, the “Basket” was packed. There were cart jams in the aisles and long lines at all 15 or so of the check out registers. Most peoples’ carts were as full as mine. I was not surprised. It has been this way at Market Basket ever since the strike.

For those of you who do not live in New England, the Market Basket strike might have only been a blip on your radar screen. It was not, however, a normal strike. There was no union involved and the employees were not “striking” to get an increase in their wages or benefits. It actually was an uprising. The “Basket” workers rose up on behalf of the president of the company. When was the last time that happened? Never!

The details do not matter. All you need to know is that there was a family brawl in the boardroom. As a result, a cousin fired the workers’ beloved boss, President Artie. At least, he tried to fire him, but the workers rose up and said “No!” They shut the entire chain of stores down. It lasted for several weeks. The new management fired a few folks. They threatened to let everybody go. The “Basket” employees, however, remained resolute. When the new regime did try to open a store, not only did the workers not show up, but the customers also stayed away. The company began hemorrhaging money. At last, the cousin and his allies gave up. They sold out to Artie. The stores re-opened, the employees happily went back to work and customers flocked back to the “Basket” in record numbers.

The first time I went back, I accidentally crashed my cart into an employee in one of the over-crowed aisles. “I’m so sorry,” I said.

He smiled and replied, “Thanks.” Then, he continued restocking Puffed Wheat on the shelf.

Yesterday, as I was shopping, I bumped (not literally) into that guy again. I said, “Hey, how are you? Do you remember me? I crashed my cart into you shortly after the store re-opened.”

“Yea, I remember,” he said, as he quickly moved out of harm’s way.

“How are things going?” I asked.

“Living the dream!” he said. As opposed to the guy who deadpanned the same thing to me at B.J’s a couple of years ago, his smile told me that he meant it.

Those employees risked their livelihood to stand up for Artie. They rose up for him, because he looked out for them. Artie made sure they earned a decent wage, received some benefits and were treated fairly. Artie must not have been trained in corporate human relations theory. The “Basket Employees” were not simply human capital to be acquired, expended and discarded. Nope. Artie sees them as living, breathing human beings that are the key to Market Basket’s success. They are. The long lines prove it.

There is, however, a greater lesson to be learned. In our society, we can easily be discarded, if we don’t stand up for ourselves. We can complain about our country all we want, but Artie and the “Basket” employees taught us that we still have the freedom to say “No!” to greed and inequity. We will be acquired, expended and discarded, only if we allow it to happen.

There is a lot going wrong in our world today. Inspired by Artie and the “Basket” workers, maybe we are past due in standing up for ourselves. Our fate need not be inevitable. There are more of us who want to do what is right and fair, than there are those who would abuse us in the name of the god of personal gain. The “Basket” employees also taught us that, even though we may be called upon to stand alone, it is much more effective to stand together.

I like that thought. It was worth standing in a long line at “Market Basket” to learn it.

2 thoughts on “An Epiphany at the “Basket””